Thank you, Finn Jacobson and Quora.

How To Use “Have Been” and “Had Been” In English?

How To Use “Have Been” and “Ha d Been” In English?

7 TIPS FOR LEARNING A NEW LANGUAGE

The secrets of learning a new language

. When I start learning a language, the FIRST thing I do is go out and buy a notebook. One of those nice ones with the (fake) leather covers. Now, we’re not talking about a “scratch all of your ideas down in an unorganized fashion.” No, no, no, we’re talking about this: 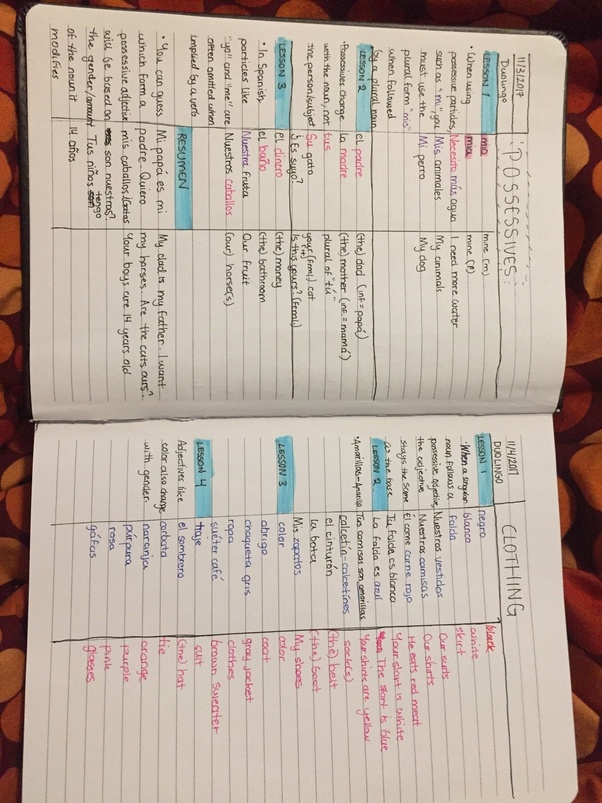 Thank you, Finn Jacobson and Quora.

Something about the clean, “studyblr-esque” feel of it all really motivates me to do that next page of my textbook or Duolingo lesson.

Stick around folks, cause I’m just getting started.

I listen to an unhealthy amount of music. I’m always walking around with an earbud in wherever I go. I have a Spotify playlist for every language I’m currently studying. (That would be Spanish, Swedish, German, Chinese, and Japanese.) My current target language is Spanish, and so most often I will listen to my Spanish playlist. The best way to learn is to just immerse yourself.

I read lots of books in all of my languages. Bear in mind that I don’t understand, nor expect myself to understand them. Most people think that reading books is simply an elite technique for advanced-level learners to use to improve their already fluent knowledge of their target language. When I read books, I simply scan the pages and look for words I understand. When I find words I understand, I look at the words surrounding them. Can I infer the meaning of that word based on the one I understand next to it? Sometimes I’ll write the words down. I see reading as a really great way to study the syntax and vocabulary of a language.

Before my computer fried itself during an update, I used to play Skyrim… A lot. One of the useful things about it was that, yep, you guessed it, IT CHANGES LANGUAGES. We aren’t just talking subtitles, no no, for seven languages, English, German, Spanish, French, Japanese, Polish, and Russian, Skyrim has been FULLY re-voice acted professionally. I’ve noticed a lot of inaccuracies in the translations however, like in languages with different levels of formality, for example, French and German, the two others that I’ve played in, NPCs never stop referring to you in the formal tense. I haven’t played in Japanese, but I just KNOW that they are bound to have some problems with formality as well. Also, they use a lot of archaic words, so video games should really only be used for immersion and not as an actual study tool.

I only ever use picture flashcards, which I actually got the idea of from Quora. I recommend picture flashcards because it helps you memorize words by concept and not by your native language equivalent. This gives you a deeper root of the language and starts to make you think in your target language, which in my opinion is the sure sign you are on the right track.

The most important however, is to SPEAK. Speak, speak, speak, speak. You may know a native speaker of the language you’re learning, so TALK TO THEM. It can be embarrassing to spit and stutter compared to the fluency of a native speaker, but when you get that feedback from an educated speaker of your target language, you are getting better. You are learning through the single most powerful force on this planet, which is human connection. Most native speakers will be more than excited to hear a foreigner speaking their language, and more than eager to help.

Overall, you can’t start learning a language thinking it will be easy. It won’t. Don’t be deceived by the “simplicity” of the language after you learn ways to say hello and goodbye. Every natural language on the planet is unique and is difficult in its own way, just as every language is easy in its own way. Rather, when approaching a language, you should expect nothing but a challenge, and be eager to take on that challenge with passion and patience.

EDIT: Wow! Didn’t expect this to get so many views. The amount of upvotes it got is really an accomplishment for me. Thank you so much!

SECOND EDIT: 1K upvotes! This is by far my most successful answer. Thank you!

Reference: Finn Jacobson, “How do people usually learn languages?” originally appeared on Quora, the place to gain and share knowledge, empowering people to learn from others and better understand the world. The best way to learn a language