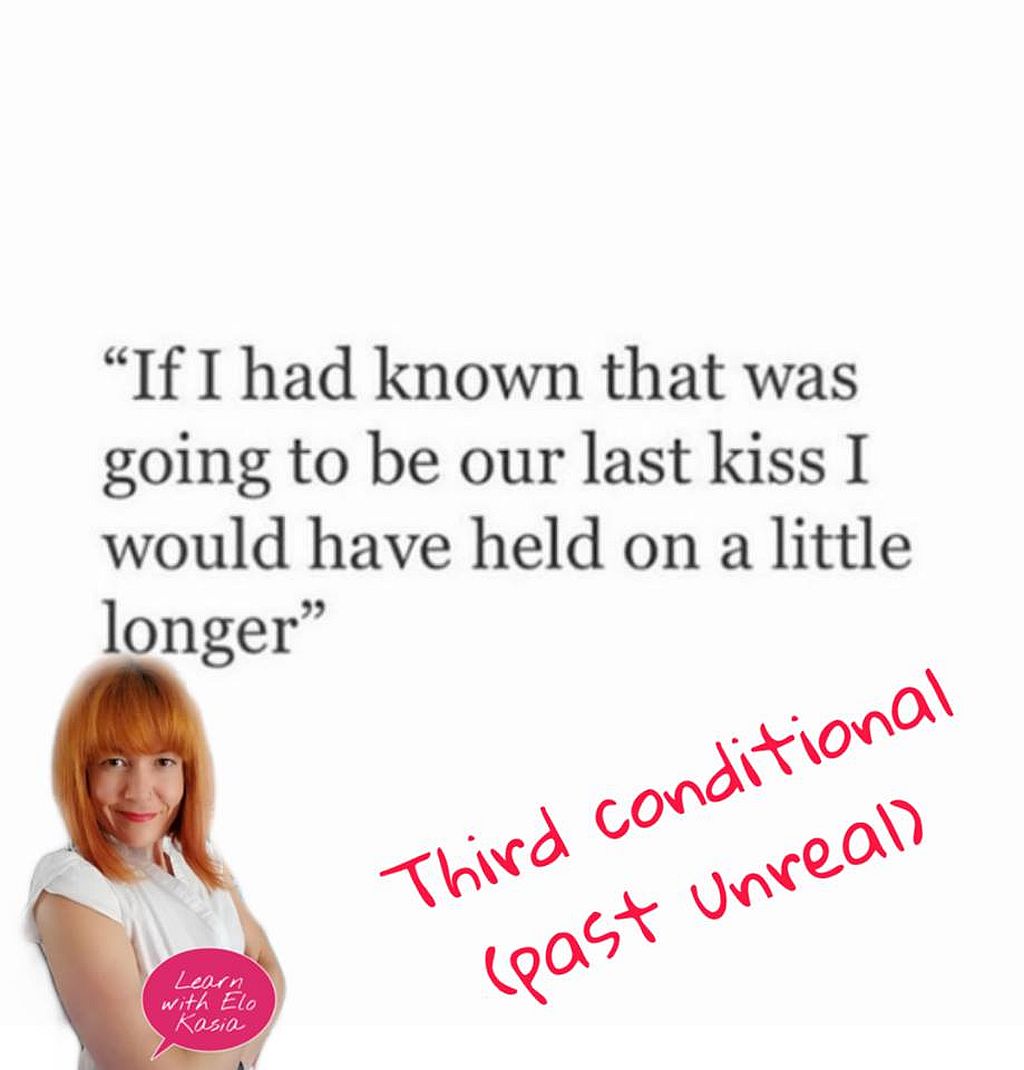 Book a lesson with your UK English tutor Elo Kasia now from $5 per hour.

What is the third conditional (past unreal) in English grammar?

@ Aftab Khan, Thank you for your question.

As usual, I will try to explain the difference using simple language and plenty of examples.

What is the third conditional (past unreal) in English grammar?

Daily grammar lesson with Elo Kasia. When do we use the third conditional (past unreal)? Easy explanation with plenty of examples.

What are conditional sentences?

Conditional sentences are used to talk about events and their results. They are made of a condition and a result. The two events are connected, as one event is a condition for the other event to happen.

The four main types of conditional sentences are:

Conditional sentences are used to talk about events and their results and are made of two clauses, the condition clause and the main (result) clause.

What is the third conditional (past unreal/hypothetical)?

If I had studied harder, I would have passed my exams. (I didn’t study and I didn’t pass, but if it had been different…)
They wouldn’t have had the accident if they hadn’t driven so fast. (They drove fast and they had the accident)

As you can see, you can change the order od the sentences without changing the meaning. The clauses in the conditional sentences can be positive or negative.

We make the third conditional by using the past perfect after ‘if’ and then ‘would have’ and the past participle in the second part of the sentence:

Past perfect is formed by the verb HAD and Past Participle (with regular verbs we add -ED, or with irregular verbs, you need to memorise the third verb form).
Apart from “would”, we can also use “could” and “might”.

Have a look at these examples:

What is the difference between the second and third conditional?

Make sure you follow our *TT exercises to practise different types of conditional sentences. For the third conditional think about a situation ii
the past and try to imagine how it could have been different, for example, you missed the bus yesterday –
If I had left the house earlier, …. I wouldn’t have missed the bus, I would have had time to go to the shop, I would have been on the bus that crashed…etc.
You had too much too eat and you felt sick yesterday.
If I hadn’t eaten so much, … I wouldn’t have felt sick, I could have had a lovely dessert, I wouldn’t have ended up in hospital, etc.

Want to learn more about the Third Conditional in English Grammar?

Book an online lesson with your favorite UK English tutor Elo Kasia now from $5 per hour.

Director at Eloquent Learning Online, educational institution based in the UK.